Bougatsa with Honey and Pistachios 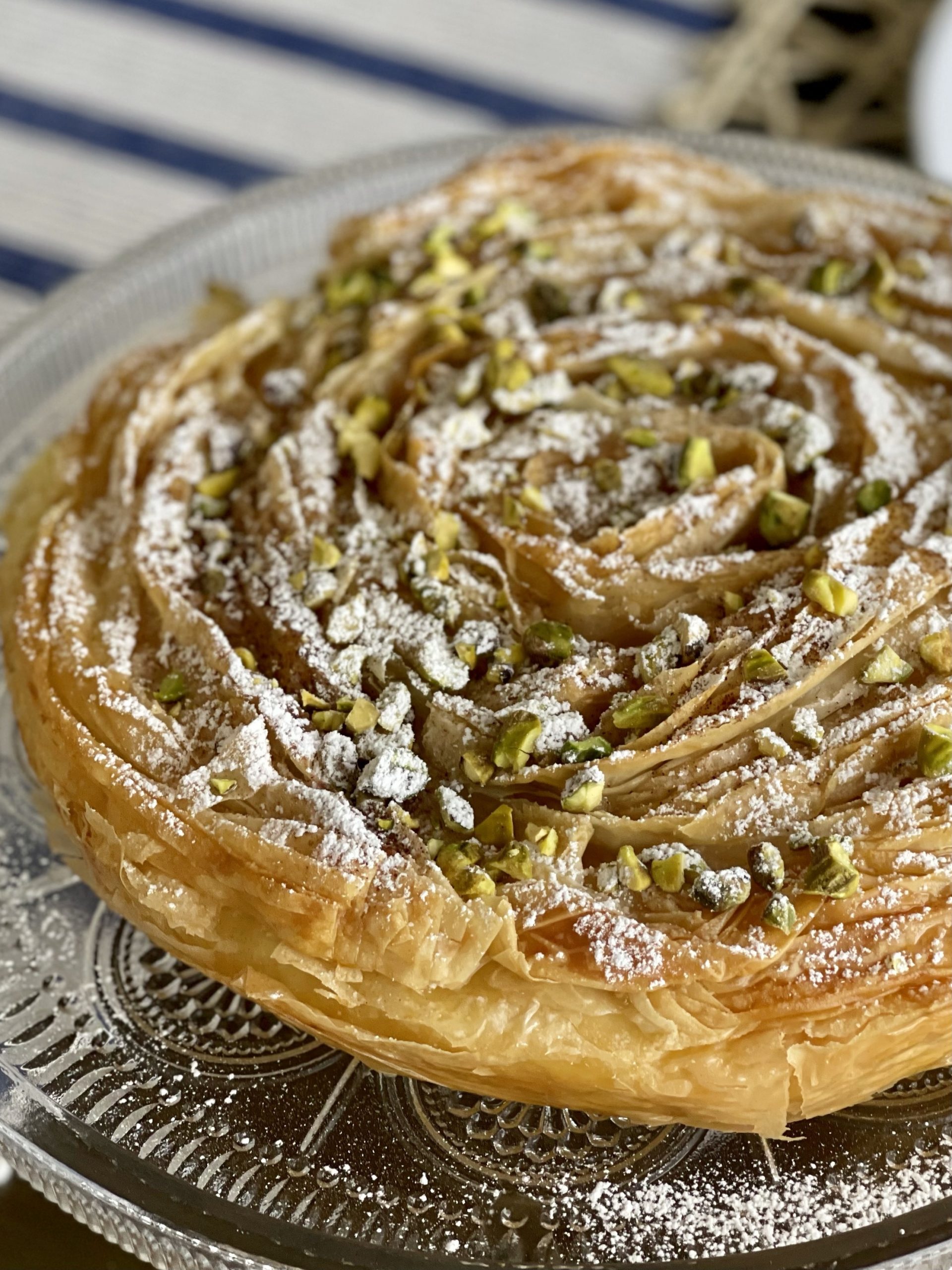 Ever since Anthony Bourdain went to Greece and showed us how Bougatsa pastries are made by hand, I was hooked. I mean, what’s not to love about a crispy phyllo pastry wrapped around a delicious cream filling, topped with cinnamon and powdered sugar? Bougatsa is a Greek custard pie that’s typically served for breakfast, lunch or anytime you want a sweet snack. They can be sweet or savory (cheese filling). Since I love all things custard, I’m focusing on the sweet version and serving it as dessert.

While researching, I looked for authentic ingredients and methods. I also came across a very similar dessert named Galaktoboureko – another custard encased in phyllo pastry. Galaktoboureko’s custard is citrus flavored and the pastry is soaked, drenched even, in a sugary syrup once it’s been baked. Bougatsa on the other hand, is just dusted with cinnamon and powdered sugar, sans syrup. Phoodie from Australia made it differently. She formed the phyllo in a spiral from the center out and added a liquid custard. The custard thickened while baking. Yummy Crumble made Phoodie’s recipe and topped it with honey and pistachios! Visually stunning. I adapted the best of all worlds and created my own delicious version, closer to the authentic version, but not strictly authentic.

HISTORY
Bougatsa became popular in northern Greece in the 20th century where many Greek refugees settled in Thessaloniki. It dates back to Byzantine times when Constantinople was part of Greece. Considering the reach of the Roman Empire, this dish probably evolved from the Roman Placenta cake (also a custard type filling wrapped in pastry) that dates back to 350 B.C.

For an authentic Greek flavor, I ordered Greek fine semolina flour and Greek honey from Amazon. You don’t need to do that, but I wanted mine to taste as if I were in Greece and Greek honey has different floral notes than my Florida orange blossom honey (also delicious). Since this is a rich, buttery dessert, use a quality butter like Plugra.

HOW I MADE IT
Preheat the oven to 350°F and place oven rack in the center. Generously butter your baking dish. I used a 9-inch deep-dish ceramic pie dish. Allow phyllo to come to room temperature in the box and melt 1 1/2 sticks of unsalted butter. Set aside.

Make the custard. In a large sauce pot, combine 5 cups of whole milk, 1 cup of sugar, 1/2 cup fine semolina flour and a pinch of salt over. Stir the mixture until the sugar has dissolved over low-medium heat and the semolina flour has been evenly distributed.
Note: If you don’t whisk/stir the semolina flour well, it can clump up. If that happens, start over.

In a smaller bowl, whisk together 1 whole egg, 3 egg yolks and 1 Tablespoon of cornstarch. Position the hot milk mixture near the eggs and temper the eggs. Once tempered, pour the egg mixture through a sieve and add it back to the large pot with the hot milk.
How To Temper Eggs: Whisk the eggs with your dominant hand and with the other hand slowly ladle and drizzle hot milk into the eggs with the other hand. You’re bringing the eggs up to temperature so they don’t scramble when you add the eggs back into the hot milk mixture. A few ladles of hot liquid should do the trick.

Bring the temperature up to medium heat, add the zest of a lemon and 2 teaspoons of vanilla paste or extract. Whisk until the mixture thickens and becomes a custard. This could take a few minutes so be patient. When the custard has thickened, add 2 Tablespoons of butter for a rich and velvety finish. Not everyone does this in Greece, but mom adds it to her custards and puddings so it must be good. Set aside.
Note: You can test if the custard is done by coating the back of the spoon and running your finger down the middle. If the custard remains in place with a visible line, the custard thickness is good. In the image above, my custard is almost done. I can tell because of the thin custard dripping off the spoon. Unlike extract, vanilla paste contains bean specks. I love how it looks in any dish.

Begin to layer the phyllo sheets. Lay one sheet, sprinkle butter and overlap with another sheet. Make sure most of the phyllo sheet covers the bottom of the dish so you can create a strong base that can hold the custard once baked. Repeat steps until you’ve added at least two layers of overlapping, buttered phyllo sheets all around the dish. Once your base is strong, pour the custard into the center and spread evenly.
Note: For a strong base, you can also add any broken strips of phyllo or fold a phyllo sheet in half and add it directly to the bottom and half way up the sides. No one will know.

Then, fold over the custard filling the overhanging phyllo. Work backwards from the last sheet you placed to the first sheet you placed. This will help keep the phyllo sheet from breaking. Sprinkle butter as you fold in the sheets.
Note: You don’t need to brush the butter on the phyllo sheets. Simply wet the pastry brush in the melted butter and drizzle or shake the brush over the phyllo dough. It’s a bit messy, but so much fun!

To create a stunning top, loosely scrunch up phyllo sheets (one at a time) into a fan or accordion and place it on top of the custard pie in a concentric circle. With the first accordion, scroll it into a circle, much like a sea shell, and place it in the center. Then wrap each subsequent accordion phyllo sheet around the circle until you’ve covered the pie and reached the edges.
Note: Don’t worry if the phyllo tears or if it doesn’t look perfect. With all the layers in the dish and the accordion topping, no one will be able to tell if your phyllo sheets were torn. The goal is to wrap the custard filling and then to create a jagged top to catch the toppings.

Generously drizzle the accordion circle with butter. Make sure the various nooks and crannies are buttered. Wet your hands and flick your fingers over the pie to sprinkle it with water. This makes for a better crispy topping according to a Greek baker. Bake for 30-35 minutes, depending on your oven. If your oven has hot-spots, you may want to rotate the pie midway or place a sheet of foil on top during the last 5 minutes. You want the pie to have a deep golden color, not pale-golden color like a sugar cookie.
Note: Don’t go overboard with the butter or your dish will be swimming in butter once baked. I had a little butter remaining. At the same time you want to butter the phyllo properly so it bakes nicely and crisps evenly.

Here’s where I fall off the “traditional” Bougatsa rails. While the pie is baking, make the honey syrup. In a small sauce pot over medium heat make a simple syrup with 1/4 cup of water and granulated sugar and add a cinnamon stick. Once the sugar has dissolved, add 2-3 Tablespoons of honey and the juice of 1/2 a lemon and stir. Allow syrup to simmer for a minute and remove from heat. Chop the pistachio nuts and set aside. Discard cinnamon stick before using syrup.

Once the Bougatsa has baked, remove from the oven and allow to rest for 15 minutes. Give it a light dusting of ground cinnamon. Use a spoon to lightly drizzle the honey-lemon-simple syrup. The cinnamon and syrup will be absorbed by the warm crust. Now I didn’t want to drench the pie with the syrup like in a Galaktoboureko, but I did want a little sweetness on top as this dessert isn’t overly sweet. Serve the extra syrup on the side.

Allow about 25-30 minutes before generously dusting with powdered sugar and garnishing with chopped pistachios. Cut and serve warm. Since this is a warm, custard pie, expect the filling to ooze out as this is a glorious and messy-to-eat pastry.

I can only tell you that this smells and looks amazing. We cut into this right away and we loved it! The dessert isn’t overly sweet. The custard is delicious and not grainy, the phyllo dough is light and crispy yet it holds it’s structure. This was an amazing, showstopper, keeper recipe! 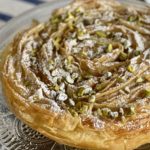 Bougatsa with Honey and Pistachios

Classic Greek breakfast pastry filled with custard and topped with a honey drizzle and pistachios. This is delightful any time of day!

Scoring the pie:   In Greece the pie usually prepared in a rectangle and it is scored before baking so it’s easier to cut and serve after.    For presentation purposes, I do not recommend scoring this pie.   Also note this is served warm so the custard filling will ooze out once cut and served.