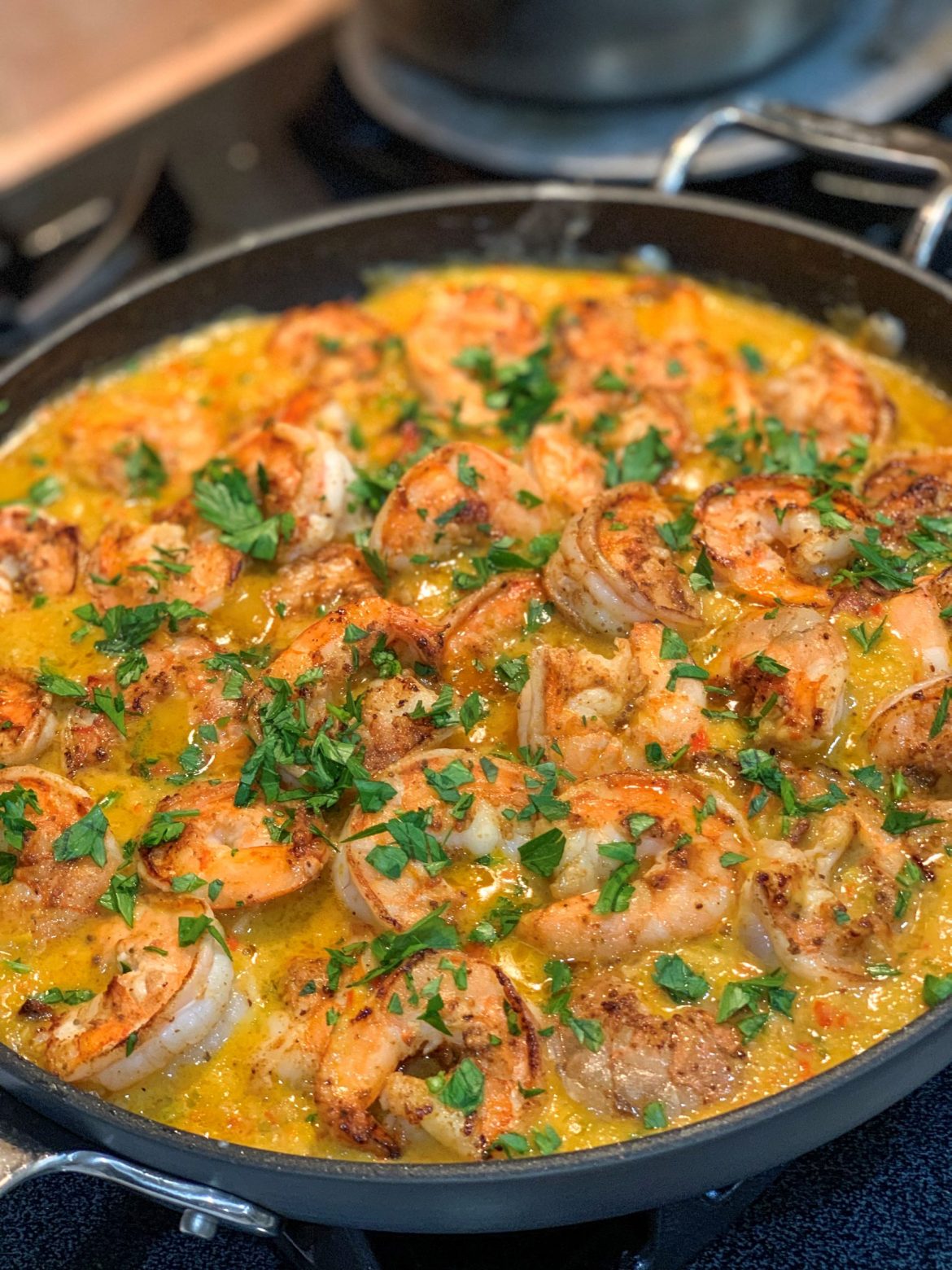 There’s nothing quite as comforting as southern cooking. Just the words conjure up pleasant images of grandmas in their kitchens slow cooking Sunday dinners for large families. It’s hearty comfort food that just means home. This low country shrimp and grits recipe embodies that sentiment. The shrimp and sausage gravy is flavorful, but not spicy. And the grits are slow cooked to perfection. It’s a flavor combination made in heaven!

HERE’S HOW I MADE IT
This dish comes together around the same time and while it’s not difficult to make, it best if you have all the ingredients chopped, prepped and ready to go before you.

MAKING THE GRITS
In a stock pot, bring the chicken stock and water to a boil. Add grits and whisk vigorously to ensure that the grits do not clump up. Add half-and-half and continue whisking until grits begin to thicken. Simmer over low heat until grits have thickened and are tender, whisking occasionally (about 15 to 20 minutes). Turn heat off and cover with lid to keep warm. You’ll finish the grits after you make the shrimp and sausage gravy.

MAKING THE SHRIMP AND SAUSAGE GRAVY
Seasoning two pounds of uncooked shrimp (peeled, deveined and tails removed) with Old Bay Seasoning and paprika. Add lemon juice and toss to ensure the shrimp is evenly coated and set aside. Cook bacon in a wide, heavy bottom large skillet over medium to high heat until evenly browned and fat has rendered – about 10 minutes. Remove bacon and drain on a paper towel. Brown the sausage slices in the bacon drippings. Remove the sausage and set aside. Add the peppers, onion and garlic. Cook for about 8 minutes or until onion is translucent. Transfer the vegetables to a food processor and pulse until they are finely minced. Finely mincing the vegetables in the food processor is optional. If you don’t mind the dices vegetables or don’t have a food processor, you can skip this step.
Note: Only the bacon rendered fat is use in the dish, not the bacon. Bacon fat or lard will impart great flavor. If you don’t wish to use bacon fat or lard, use a good olive oil.

In a separate skillet, coat the bottom of the skillet with a little olive oil and sear the shrimp over medium to high heat on each side to develop some color around the edges. Don’t overcrowd the shrimp, sear them in batches. Set them aside with the sliced sausage. Note: You are not cooking the shrimp all the way through – the middle should be raw. The shrimp will finish cooking in the sauce when you add it back in.

In the same skillet, melt the butter over medium heat to make a roux. Stir in the flour and mix with the butter until you’ve made a paste-like mixture, called a roux. Reduce the heat to low and continue stirring until the roux becomes medium brown. Don’t walk away as the roux might burn. Meanwhile in a separate sauce pot, warm up the chicken stock. When the roux is ready, slowly add the chicken broth while whisking to ensure a smooth sauce. Then add the Worcestershire sauce, vegetables and black pepper to taste. Add shrimp and sausage and stir to combine and coat the shrimp. Simmer over low-medium heat until the sauce thickens. Garnish with parsley and or scallions (optional).
Note: Whenever you’re making a gravy or a roux based sauce, it’s always best to whisk in hot liquid to the roux to ensure a smooth gravy. If you add cold liquid, it could clump up and spell disaster.

Add the cheese to the warm grits along with a little cracked black pepper and whisk together to combine. Once the cheese has melted into the grits you’re ready to serve. Garnish with parsley and or scallions, as desired.

Plated with Roasted Brussels Spouts. What a delicious meal! Adapted from AllRecipes.com. 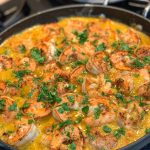 A delicious and savory low country regional favorite filled with tender shrimp and sausage over creamy and cheesy grits.