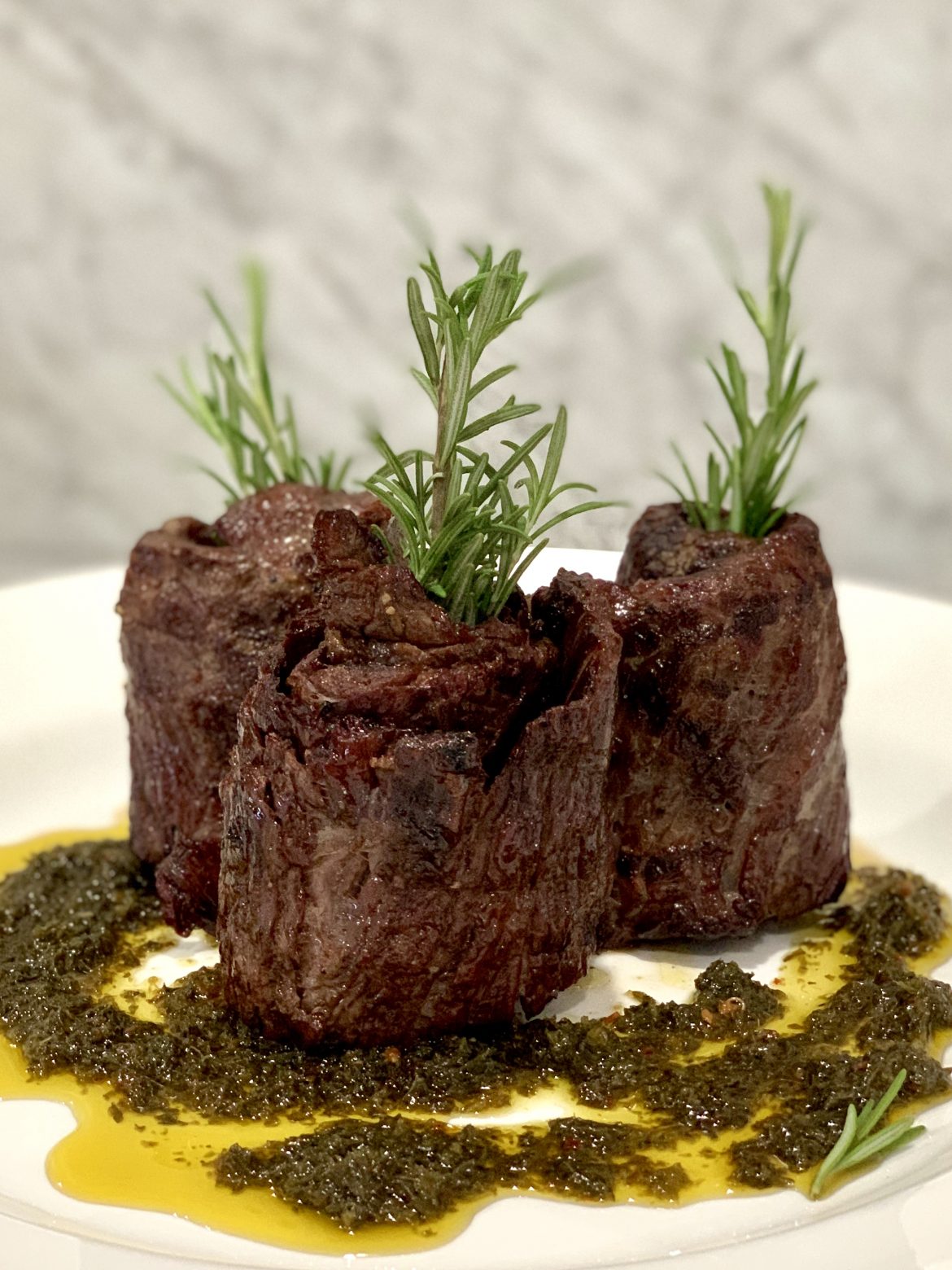 There’s no better way to kick off the summertime grilling season than with a nice Churrasco on the grill! Churrasco is Portuguese for grilled meats primarily associated with Brazil, Argentina and Uruguay. Gauchos much like cowboys would grill particular cuts of meat over the oven flames with a simple olive oil and herb sauce with a funny name – chimichurri.

The popularity of Churrasco has grown through all of the Americas and is widely found on many menus. While Churrasco is a general term for grilled meats, a churrasco is typically a grilled skirt steak (entraña), flap meat (vacio) or butterflied fillet mignon. If you’re not grilling churrasco, you should be! It’s especially beefy, tender, juicy and cooks in a flash!

Most steaks don’t need more than a good amount of kosher salt and black pepper to bring out the amazing flavor of the meat. My churrasco didn’t have a dry rub, just salt and pepper and seared it on a hot grill. Since churrasco is thin and it has so much marbling, it cooks quickly and the fat melts away quickly in the meat producing a very enjoyable steak.

What’s Skirt Steak?
Skirt steak is a thin long cut of beef from the steer’s diaphragm muscles, just below the rib section. It’s an odd cut of beef, much like flank steak, but it has a more intense beefy flavor. It takes well to marinades and are best cooked over high heat such as grilling. Skirt steak is also a popular cut for fajitas. Did you know there are two types of skirt steak?
Inside Skirt steak – AVOID – very chewy, 5-7 inches wide and 1/4-1/2 inch thick — best marinated to tenderize
Outside Skirt steak – BUY THIS ONE – very tender, 3-4 inches wide and 1/2-1 inch thick

What’s Chimichurri Sauce?
It a delicious sauce/marinade created by gauchos in south America and commonly attributed to Argentina, Brazil and Uruguay. I first tried it in Hialeah, FL at an Argentinean restaurant Graziano’s. They have an amazing steakhouse with an adjacent market including a full bakery and butcher shop. Sauce consists of parsley, red pepper flakes, garlic, oregano, red wine vinegar and salt and pepper. For years I bought Graziano’s chimichurri, but they are not so close to me and I’ve been making my own. I’ll link a recipe soon.
Note: Graziano’s has been featured in Food Network’s Food Paradise: All In The Family episode.