Home 4th of July Panzanella
4th of JulyRecipesSidesSoups and Salads 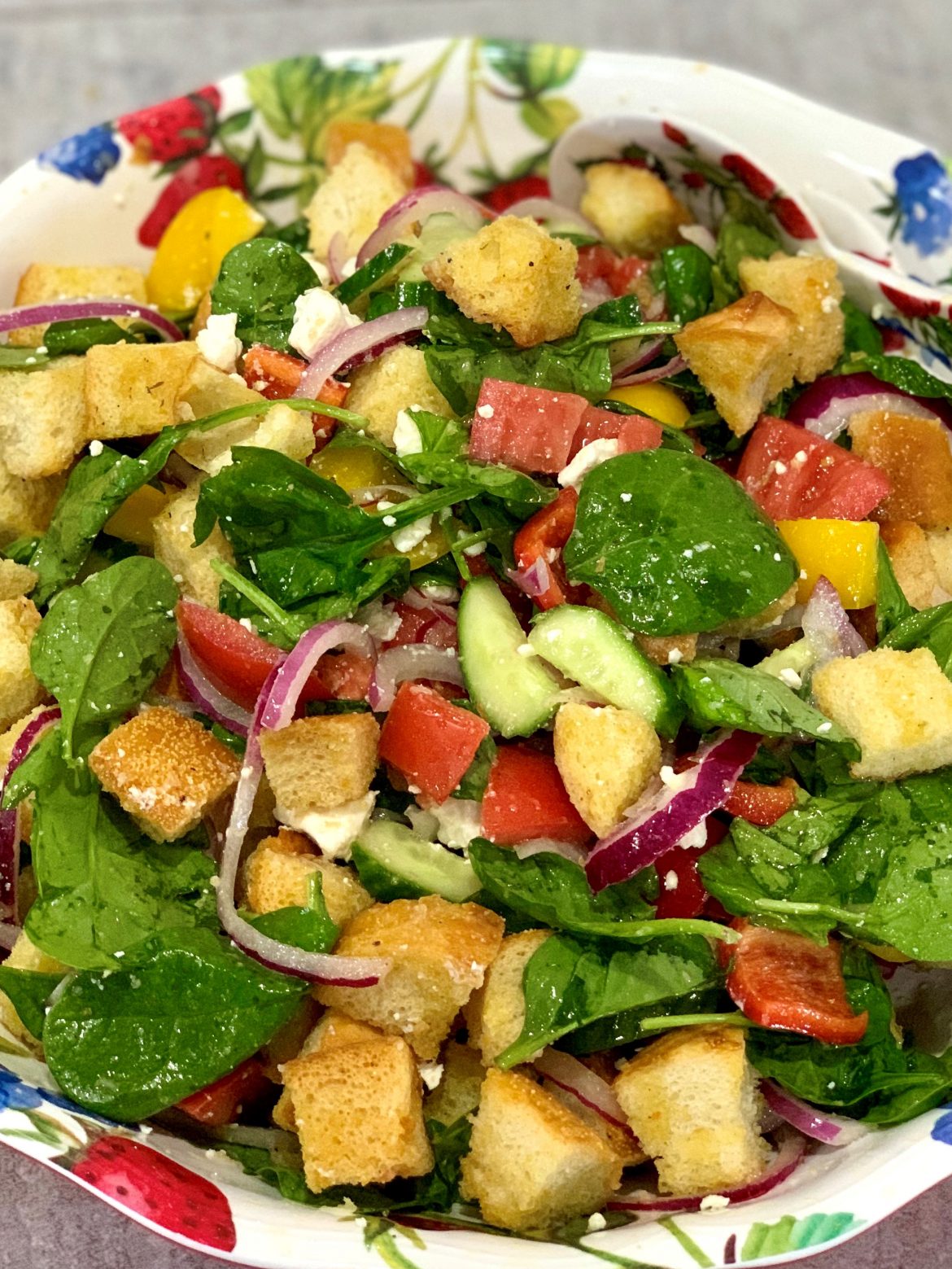 Panzanella is a simple yet delicious Tuscan bread salad that is also popular in other parts of Italy. It is believed the name came from “pane” for bread and “zanella” for the deep plate is was typically served in. Originally the dish was bread and onion based, tomatoes came along in the 20th century.

Although the modern version is made up of bread, onions, tomatoes, olive oil, vinegar, cucumber, basil and salt & pepper, other ingredients such as lettuce, olives, cheese, wine, capers, anchovies, celery, carrots parsley mint, bell peppers, lemon juice, garlic, tuna and boiled eggs have been added, but Florentines disapprove of all these ingredients according to Wikipedia. I hope the Florentine’s aren’t too upset with me, but here’s my Panzanella version and I’m eager to share it with you. It’s so good!

In a wide salad bowl or zanella plate, combine baby spinach, hothouse seedless cucumber cut on a bias, red and yellow bell peppers cut in cubes, a bunch of rough chopped basil leaves and thin slices of red onion. Set it aside. I cut each vegetable differently because I like the different shapes and colors, it adds dimension to the salad, but you can cut your veggies any shape you prefer.
Note: Love Hothouse cucumbers, a.k.a. English cucumber & European cucumber, they are seedless with a thin skin and you don’t need to peel them. Just wash well and slice away. They are said to be burp-less since they are easier to digest and that’s just an add extra brownie points. They work perfectly in any salad or pickled.

Cube a French baguette and add to a sheet pan. Sprinkled with good olive oil, salt, pepper and Italian seasonings. Toss together to evenly coat the bread, then bake at 350°F for about 10-15 minutes. I didn’t time it.

Make the Classic French Vinaigrette with garlic (southern France) while the bread toasts in the oven. According to Julia, fresh is best. As soon as the bread is ready, add it to the salad, pour all the dressing over it and toss to coat to combine all the ingredients. The warm the bread soaks up the simple vinaigrette and semi-wilts the spinach. A great marriage of flavors! Add the feta cheese and toss to combine, again and finish with a sprinkling of Maldon sea salt and black pepper.

I wanted to add kalamata olives, but I didn’t have any. What a wonderful addition. This recipe also works well with grilled vegetables. Panzanella is such an easy adaptable recipe to customize to personal preferences or themed party. I served this salad with grilled skirt steak and it was spectacular! What a delicious combination of flavors and textures. Perfect meal to kick-off the summer grilling season! 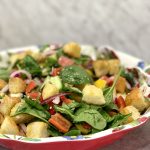 A delicious Tuscan bread salad that's a perfect summertime side for chicken, meat or fish that's grilled or roasted. This salad is easy to put together and you can add your favorite ingredients.

Post more! Seriously, I am really digging what you have written so far. I’m scanning your blog right now for more things to read.

Thank you so much! Appreciate the kind words.