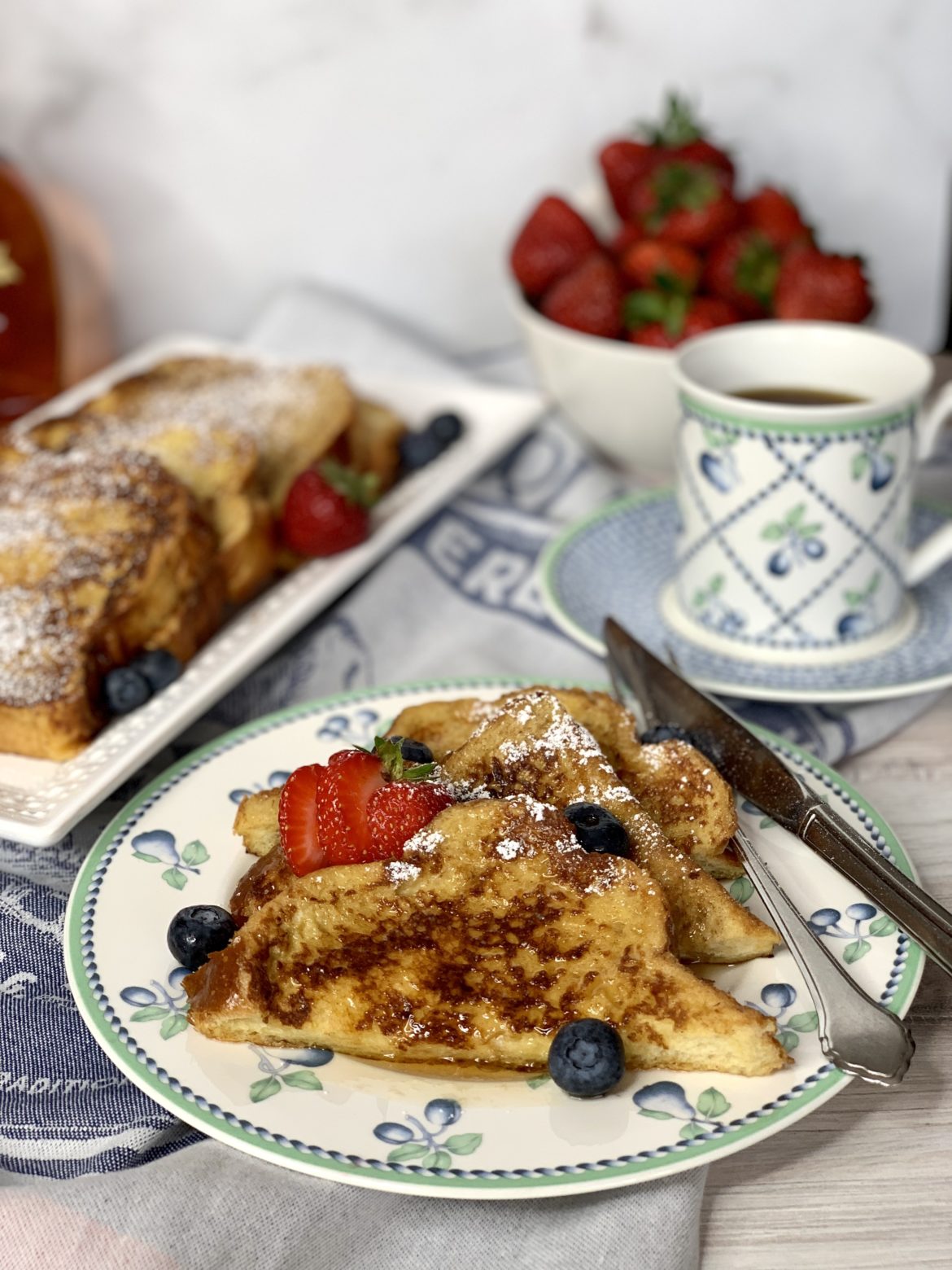 Sunday mornings are made for French Toast! This delicious one-bowl recipe transforms day-old bread with just a handful of ingredients! I’m a huge bread fan, so it’s no wonder that I would love a breakfast bread recipe. While this recipe is to be made on-the-spot, French Toast can also be made overnight in a casserole like my Orange, Almond, Amaretto Panettone Casserole.

HISTORY
How anything gets its name or claim-to-fame is funny. What Americans call French Toast actually dates back to Roman times! Yes, the first known recipe can be found in a 5th century book by Apicius. Considering the wide span of the Roman empire, it’s no surprise the recipe has made it’s way to Spanish, German, French and other European cookbooks of old.

In 1660, the term “French Toast” first appeared in England. It is believed the term French doesn’t designate the dish’s country of origin, but a verb “to French” in Old Irish, meaning “to slice” – as in French fries (sliced potatoes) and French toast (sliced bread). In America, the term first appeared 1871 with similar recipes also called Spanish toast and German toast.

INGREDIENTS YOU’LL NEED
1 day-old brioche or challah bread loaf – good substitute is croissant bread or your favorite bread
4 eggs, large or extra large and at room temperature
1 cup of whole milk, half-and-half or cream (or combination) – good substitute is diluted evaporated milk
2 Tablespoons granulated sugar
1 teaspoon ground cinnamon
1/4 teaspoon ground nutmeg
1/2 teaspoon vanilla paste or extract (vanilla paste has all those beautiful vanilla bean specks)
a small pinch of kosher salt to balance the sweetness
butter or canola oil to coat the griddle or pan – I like to use an upright stick of unsalted butter for better control

HERE’S HOW I MADE IT
Preheat your griddle over medium heat while you mix the custard batter and slice the brioche loaf. You’ll know the griddle is hot when you flick water onto it and it sizzles and evaporates quickly. Lower the heat to medium-low when you’re ready to cook the toast.

Cut the brioche loaf into 3/4-1 inch slices and set aside. Today I used challah bread. I love the light texture that’s similar to brioche bread. This recipe yields 8 slices so you’ll have some leftover bread (usually the ends). You can enjoy the remaining brioche bread as a snack or freeze for future use.

In a medium size mixing bowl, whisk together 4 large or extra large eggs at room temperature, 1 cup of whole milk or half-and-half (or any combination of milk and cream), 2 Tablespoons of sugar, 1 teaspoon of cinnamon, 1/2 teaspoon vanilla paste or extract, about 1/4 teaspoon of nutmeg and a pinch of kosher salt. Whisk together for a few minutes until well blended and you don’t see any egg particles.

Soak each slice in the egg mixture for a few seconds, ensuring the surface and edges are all coated, but not saturated. Lift and allow any excess liquid to drain back into the bowl.

Butter the griddle when it’s nice and hot. I like to hold a cold stick of butter upright and run it across the griddle. I have better control and I don’t use as much butter. Place the bread slice immediately on the griddle and cook for 2-3 minutes or until golden brown. Repeat this step with the remaining slices.

When you’re ready to flip, use a spatula to lift the slice, butter the griddle again and flip the brioche slice. Cook for an additional 2 minutes or until golden brown. When done, transfer to a warm plate and serve immediately. That’s it! It’s so simple, but sounds so complicated.

I love a few warm slices with real warm maple syrup, fresh fruit and a dusting of powdered sugar. It doesn’t get any better. This is truly a treat any day of the week, but especially on Sunday morning when things are slower and you’re trying to stretch the weekend and take it all in.
Note: If you’re making a large breakfast, you can make the French Toast and keep warm in a 180°F preheated oven, loosely covered in foil.

Once you understand the basic recipe and cooking method, you can get creative and make all types of French Toast – think casserole, stuffed and even made with other breads like banana bread. You can also add a crunchy streusel topping or brûlée. As I make other versions, like Spanish Torrejas, I’ll add to the blog.

I hope you try these and leave a comment below. I would love to hear from you. Enjoy! 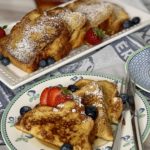