Rarely have I hosted a party when King’s Hawaiian rolls didn’t make an appearance as a slider in one form or another. Sliders are perfect for any party or gathering. This Cubano style slider is a delicious bite and just plain awesome. This isn’t an authentic Cuban Sandwich, but a darn delicious hack nonetheless.

HERE’S HOW I MADE IT
I’m substituting Cuban bread with King’s Hawaiian original rolls (sacrilege) and substituting Serrano ham and Cuban roasted pork with deli meat from my local grocery store. Preheat oven to 350°F, place oven rack in the center and line a baking tray or tin with parchment paper.
Note: If using a tin with sides, make sure you allow enough parchment paper to easily lift and remove the sliders. Shown below are traditional flavors in a Cubano sandwich. Serrano Ham is the ham commonly used for Cuban sandwiches. If you want it, ask for it at your deli along with Spanish Roasted Pork. I didn’t use Serrano ham as I prefer Sweet Slice Ham from Boar’s Head brand.

Since this isn’t an authentic Cuban sandwich, you can use any ham you like. I bought my favorite deli ham, Boar’s Head Sweet Slice ham, and Spanish Pork Roast. I asked for a very thin slice for a more enjoyable texture when you bite down. If you wish to make it Tampa style, add a little Italian salami too.

Melt the butter in a sauce pan. Remove from heat and combine with mustard, Worcestershire sauce and minced onions. Set aside. With a serrated knife, cut the rolls lengthwise through the middle, separating the top from the bottom. Spread some mustard sauce on the bottom bun. Spread some regular yellow mustard and place a pickle on each slider.

Begin to layer the roasted pork, making sure you overlap the pork and cover the entire surface. Repeat with ham and top with Swiss cheese. I did 2 layers of pork, 3 layers of ham and 2 layers of cheese. Top with the bun and score the sliders.
Note: Scoring or cutting the sliders completely through will help when plating and serving. I like to cut them and bake them together like you would biscuits or cinnamon rolls.

Transfer onto a baking pan lined with parchment paper. Using a silicone brush, spread remaining mustard sauce evenly over the sliders. Loosely cover with foil. Bake at 350°F in the center rack for 20 minutes. Remove foil and bake until golden brown, about 5-10 minutes, depending on your oven. Remove from the oven, and serve immediately. 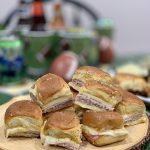 A delicious and easy to make Cubano style slider made with King's Hawaiian Rolls. Perfect for any party or gathering.