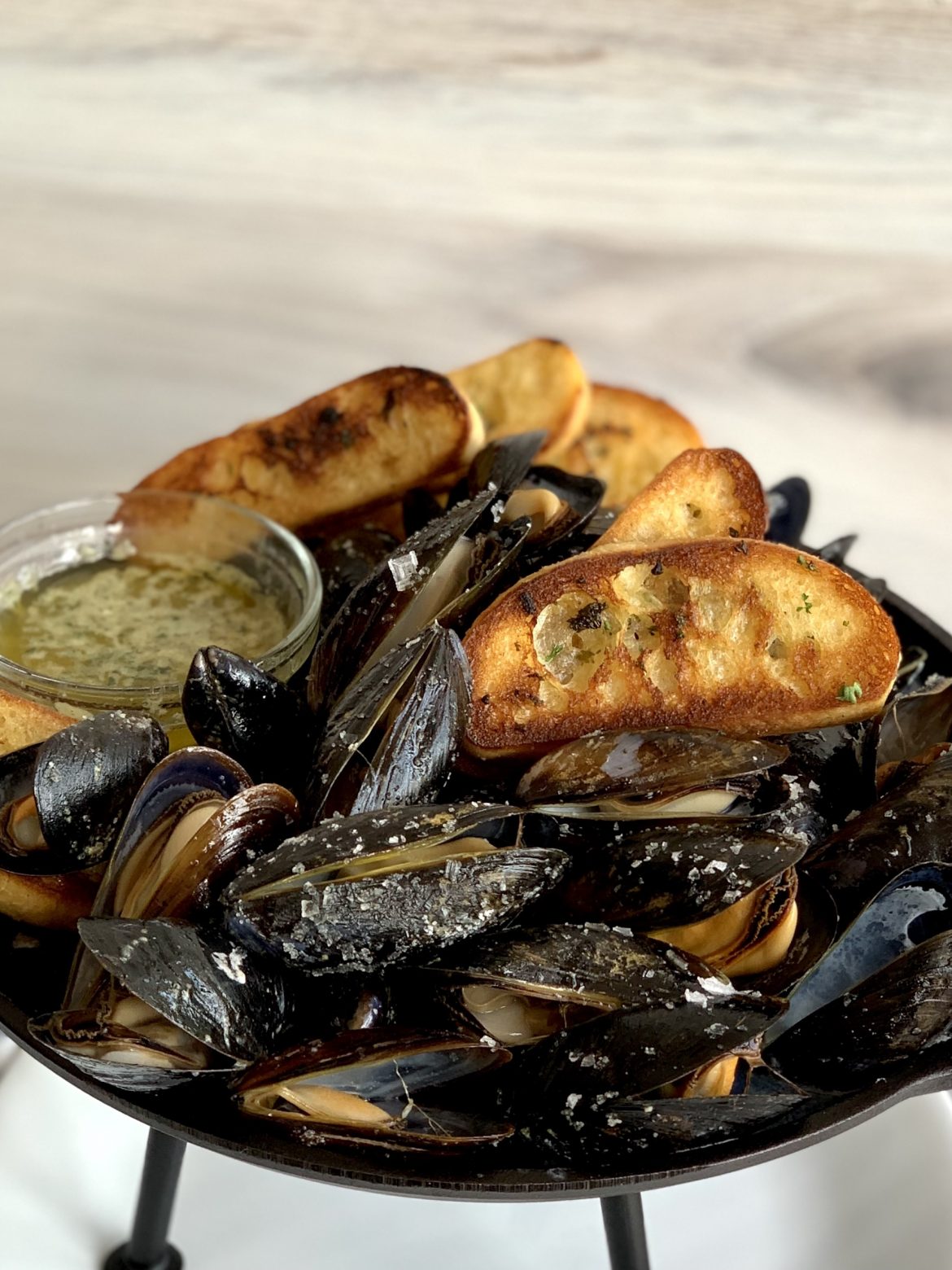 I can’t tell you how many times I’ve been to Timpano’s Italian Chophouse Restaurant on Las Olas Boulevard in Fort Lauderdale and I’ve never been disappointed. Timpano’s is a true gem with their superb food, great service and vibrant ambiance. My favorite appetizer is their Black Skillet Roasted Mussels. It arrives sizzling hot on a cast iron skillet with ciabatta bread and drawn butter. Warning – order two because they are addictive.

A few years back Chef Patrick Quakenbush from Timpano’s Tampa, FL restaurant shared the recipe in a local paper and I’ve been wanting to make it ever since. It’s a method actually and it’s all very simple with just three main ingredients – mussels, extra virgin olive oil and sea salt. The key is quality, fresh ingredients. While shopping at Costco the other day, I came across some beautiful PEI (Prince Edward Island) mussels and decided to give the recipe a go. What a delight! They turned out better than I anticipated.

HERE’S HOW I MADE & SERVED THEM
Recipe calls for the oven to be preheated to 600°F. My oven’s highest setting is 550°F so that’s the temperature I used. I placed a clean and seasoned cast iron skillet on the center rack and allow the skillet to get sizzling hot. While the oven was warming up, I washed and debearded the mussels, then dried them with a few paper towels.
Note: Make sure you wait an extra 10 minutes after the oven’s been preheated before roasting them. During those 10 minutes, make the ciabatta toast or enjoy a glass of wine. Washing and Debearding Mussels: run the mussels under cold water and brush off any barnacles or debris that could be on the shell. Discard any broken mussels. If any are open, lightly tap the shell – if it closes, it’s alive; if it doesn’t close, discard it. The “beard” is a clump of fibers that sprout from the shell. While farm-raised are fairly clean, if you see any with a beard, grab it with a pairing knife and your finger, and give it a good tug it toward the hinge of the shell. It should come right off.

Place the dry mussels in a bowl and coat with about 1-2 Tablespoons of first cold press extra virgin olive oil. You don’t want the mussels to be drowning in oil, you want enough oil to just coat them. Sprinkle generously with sea salt. Set them aside until the oven is very hot.
Note: Olives are pressed to extract their oils. The “first cold press” is the first time the olives have been pressed – making the first oil the most concentrated and flavorful. After the first cold press, the olives are pressed and processed to produce different kinds of olive oil.

In the meantime, slice a few pieces of ciabatta bread, spread with a delicious compound butter like my Maître d’Hôtel Butter, and toast in a hot skillet over medium heat a few minutes on each side. Set aside.

Transfer the mussels onto the hot cast iron skillet. The second it makes contact, they will begin to sizzle and smoke. This is normal. Close the oven door and roast the mussels for 1 1/2 minutes. The mussels should completely opened and cook perfectly with the intense heat. Serve immediately with additional melted butter and the ciabatta bread slices. Don’t eat those that don’t open.

What an amazing appetizer! These are perfectly cooked yet tender. Dip the bread in the butter and sop up some salty juices on the skillet. If all your guests eat mussels, make two batches! I hope you enjoy my interpretation of a great appetizer. Mangia!
Note: Chef Quakenbush’s recipe didn’t specify amounts or cooking time. Simply said Mussels will open up pronto. I should say so at 600°F. 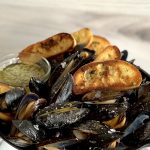 A showstopper appetizer! Sizzling hot mussels cooked to perfection. One of my favorite appetizers from Timpano's Italian Chophouse restaurant in Fort Lauderdale, Florida.

Note:  Mussels should be cooked and consumed within three days of purchase.