If there’s something I’ve learned from The Barefoot Contessa, is that you don’t have to cook everything when entertaining. I like to take that advice a step further and say, don’t be afraid to take a few short cuts even when cooking for a crowd! This baked bean recipe is a perfect example.

Baked beans are a BBQ staple at our house. When it’s a quick family BBQ cookout, grocery store baked beans are great. But when it’s a summer BBQ party or holiday, I wouldn’t serve any other baked beans. While I’m still taking a shortcut, they taste like you’ve slow-cooked them all day and your guests will love them!

Start by heating a large skillet over medium heat and cook the bacon until crispy and the fat has rendered out (8-10 minutes). Remove the bacon onto a paper towel and add the diced onions. Cook the onions until translucent and just starting to crisp.
Note: You will need about 4-5 Tablespoons of bacon fat for the recipe. I use lean bacon strips with less fat so I don’t discard any fat. If using thick sliced bacon, discard some bacon fat before adding the onions.

In a heavy duty stock pot, like a Dutch oven, add the cans of baked beans and warm up over medium heat. Add the cooked onions with the bacon fat, ketchup, molasses, brown sugar and dry mustard. Stir until well combined and cook for about 30 minutes – stirring occasionally so they don’t stick. Layer the bacon strips on top, reduce temperature to low and cook for an additional 5-10 minutes.
Note: You can also bake them in the oven at 350°F for 30 minutes.

This recipe was adapted from Mary’s Baked Beans, although some credit Betty Crocker with the original recipe. It doesn’t matter to me who gets the credit, I just know it’s the best I’ve eaten and I hope you agree! 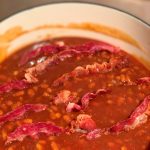 These baked beans come together in no time and have that cooked all day taste. The perfect balance of sweet and savory. The perfect addition to any BBQ meal.