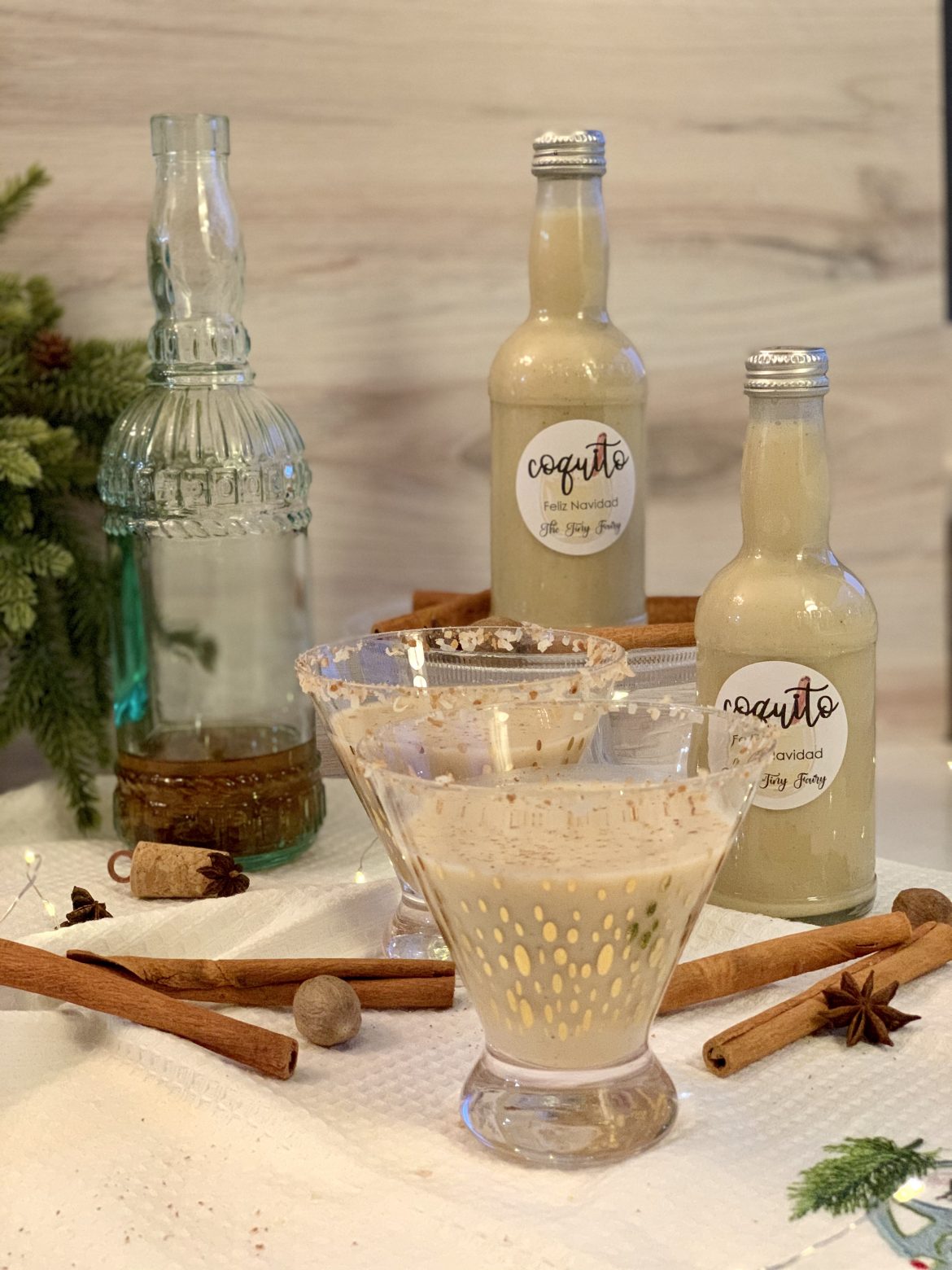 Coquito is Puerto Rico’s national Christmas holiday drink. It’s made throughout the island and recipes vary from family to family. Puerto Ricans feels strongly about their Coquito (diminutive for coconut) and what goes in it. Some say Coquito is Coquito, not eggnog. It’s in a category all by itself. And, then there’s the debate regarding the addition or omission of egg yolks – with strong opinions on both sides! Some believe the addition of the egg came about in an effort to Americanize the original recipe. I don’t know, so I have made it both ways – no offense to the great people of P.R. Below I give you both recipes and you decide.

Needless to say the drink is a source of pride and rightfully so. This lush and smooth drink consists of evaporated milk, sweetened condensed milk, cream (not milk) of coconut, spices and Puerto Rican rum! No matter how you make it, this decadent drink is best served cold and meant to be sipped while in good company. No one should every drink alone – especially over the holidays!

ABOUT THE RUM
While there are many rums made throughout the Caribbean, including Puerto Rico, I’m partial to Cuban rums. Bacardi is one of the most recognizable labels worldwide. Established in 1862 in Santiago de Cuba, Castro’s revolutionary forces illegally confiscated all Bacardi assets on October 14, 1960 and the Bacardi family fled the island. Prior to their departure, they had previously moved their trademarks and yeast strain so they were able to continue operations in the U.S., Mexico, Puerto Rico, Spain and the Bahamas. No matter where it’s produced, it will always be considered a Cuban product and family. I just wanted to clarify that. Esquire has a great guide to Cuban rum here.

LET’S MAKE MY COQUITO EGGNOG!
Over a double boiler with an inch of low simmering water at the bottom of the pot, whisk together a can of evaporated milk and two egg yolks (no whites). Whisk continuously until the mixture thickens and you can coat the back of a wooden spoon.

Remove from heat and transfer to a blender. Add a can of cream of coconut, can of sweetened condensed milk, half & half or whole milk, rum, vanilla extract, ground cinnamon, ground nutmeg and pinch of cloves and blend for 30 seconds or until all ingredients are well blended. Pour through a fine sieve into a large pot to remove any egg particles and spices that didn’t blend well. Place plastic wrap directly over the liquid to avoid forming a skin and chill at least 8 hours, best overnight.
Note: My blender was too small for all the ingredients so I only blended the cooked egg mixture, cream of coconut, condensed milk and spices. I poured liquid through a sieve into the large pot and added half & half and rum directly to the pot, and stirred to combine. Because the recipe yields a little more than a 750 ml bottle, I tripled the recipe. Make sure your pot is large enough for all your batches.

Once chilled, stir to combine again (since the spices may settle at the bottom) and pour through a sieve one final time before bottling. This extra step will remove any skin that could have formed while chilling. Sterilize your bottles and use a ladle and funnel to fill the bottles. You can make your own labels or have some made on Etsy. Shown below in pretty festive mini martini glasses with a toasted coconut rim and sprinkled with cinnamon. You can also garnish with a cinnamon stick.

LET’S MAKE NO-EGG COQUITO!
Remember this is the no-egg version so it’s much quicker to make and no cooking. Blend all ingredients in a blender and blend for 30 seconds or so. No need to pour through a sieve. Chill for a few hours and serve cold in a punch bowl or decorative bottles. Garnish with cinnamon stick.

Some folks in Puerto Rico enjoy their Coquito with rum soaked raisins. I always have a few soaking in a bottle for any guest that wants a rum-raisin floater! Any left over raisins go into my amazing Bread Pudding with Spiced Rum Sauce!
Garnish: Dry toast shredded coconut in a dry pan over medium to low heat, constantly moving the coconut. Once toasted, finely chop on a board or quickly blitz in food processor. Toss with a dash of ground cinnamon. Wet the rim of the glass and dip in the toasted coconut.

Cheers to family, friends and the hope and promise of a New Year! I love to gift Coquito to family and friends with a cookie tray. I like to use glass bottles with twist off caps. I sterilize the bottles and caps and make the Coquito the night before, then fill the bottles and decorate before gifting.

Let me know if you liked it and leave a comment below. 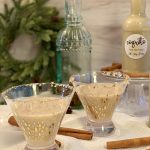 A traditional Puerto Rican Christmas holiday drink that's creamy and delicious. The tropical flavors of coconut and rum make this concoction a delight!

To make what some would consider an authentic (eggless) Puerto Rican Coquito:
Blend all ingredients listed, minus the egg yolks, in a blender and blend for a minute.  No need to pour through sieve.  Chill for a few hours and transfer into a punch bowl or bottles.   Serve cold and garnish with cinnamon stick.

Recipe keeps up to two months refrigerated, but always consumed by Christmas Day!